Last Seven No. 1 Overall NFL Draft Picks: Where Are They Now?

Next Thursday in Las Vegas, a new prospect will take the stage to become the 87th player selected first overall in the NFL Draft. Barring any trades, the Jacksonville Jaguars will make the top pick for the second straight year, with edge-rushers Aiden Hutchinson and Travon Walker pegged as the overwhelming betting favorites.

Whether it’s Hutchinson, Walker, or another high-level prospect, this year’s top pick will join an exclusive club. While the NFL’s history of No. 1 picks features numerous all-time greats, it’s not guaranteed that the first player drafted will become a successful pro.

For now, let’s look back at the last seven first-overall picks to assess their careers and conclude whether each of them earned their lofty draft-day selection.

The Jaguars enter the 2022 NFL Draft with genuine mystery clouding their selection. However, the mystery of their 2021 selection ended the second they clinched ownership of the No. 1 pick.

Trevor Lawrence was one of the more obvious first-overall choices in recent memory. The 6-foot-6 signal-caller led Clemson across three productive seasons, the first of which resulted in a national championship. By the time he left college, Lawrence was widely viewed as the top QB prospect to enter the draft since Andrew Luck in 2012.

However, thanks in part to the Urban Meyer fiasco and a dumpster fire of a roster surrounding him, Lawrence threw just 12 touchdowns with 17 interceptions in his shaky rookie year. However, the 22-year-old offered a glimmer of hope in Week 18, throwing two TDs with no picks in Jacksonville’s 26-11 upset over the Indianapolis Colts.

It’s far too early to close the book on Lawrence. With former Super Bowl champ Doug Pederson replacing the disgraced Meyer, year two will be a crucial year of development for the NFL’s most-recent top selection.

The last time NFL fans saw Joe Burrow, he was minutes away from securing the Lombardi Trophy. That was less than two years after the Cincinnati Bengals selected him with the top pick of the 2020 NFL Draft.

With the Andy Dalton era ending with a two-win campaign, the Bengals made Burrow their first No. 1 pick since Carson Palmer in 2003. The Ohio-native was fresh off a legendary season with LSU, vaulting the Tigers to a national title while securing the Heisman Trophy.

Burrow’s rookie year ended after ten games due to gruesome ACL and MCL tears. Before the injury, he managed to throw 13 touchdowns with only five picks. Last season, the 25-year-old stayed on the field and tossed 34 TDs, while also accruing 4,611 passing yards and a league-best 70.4 percent completion rate. He also threw for another five scores during Cincy’s improbable four-game playoff run.

If he’s not there already, Joey B is on a collision course with superstardom. All the Bengals have to do is ensure their offensive line keeps him upright for the next decade. 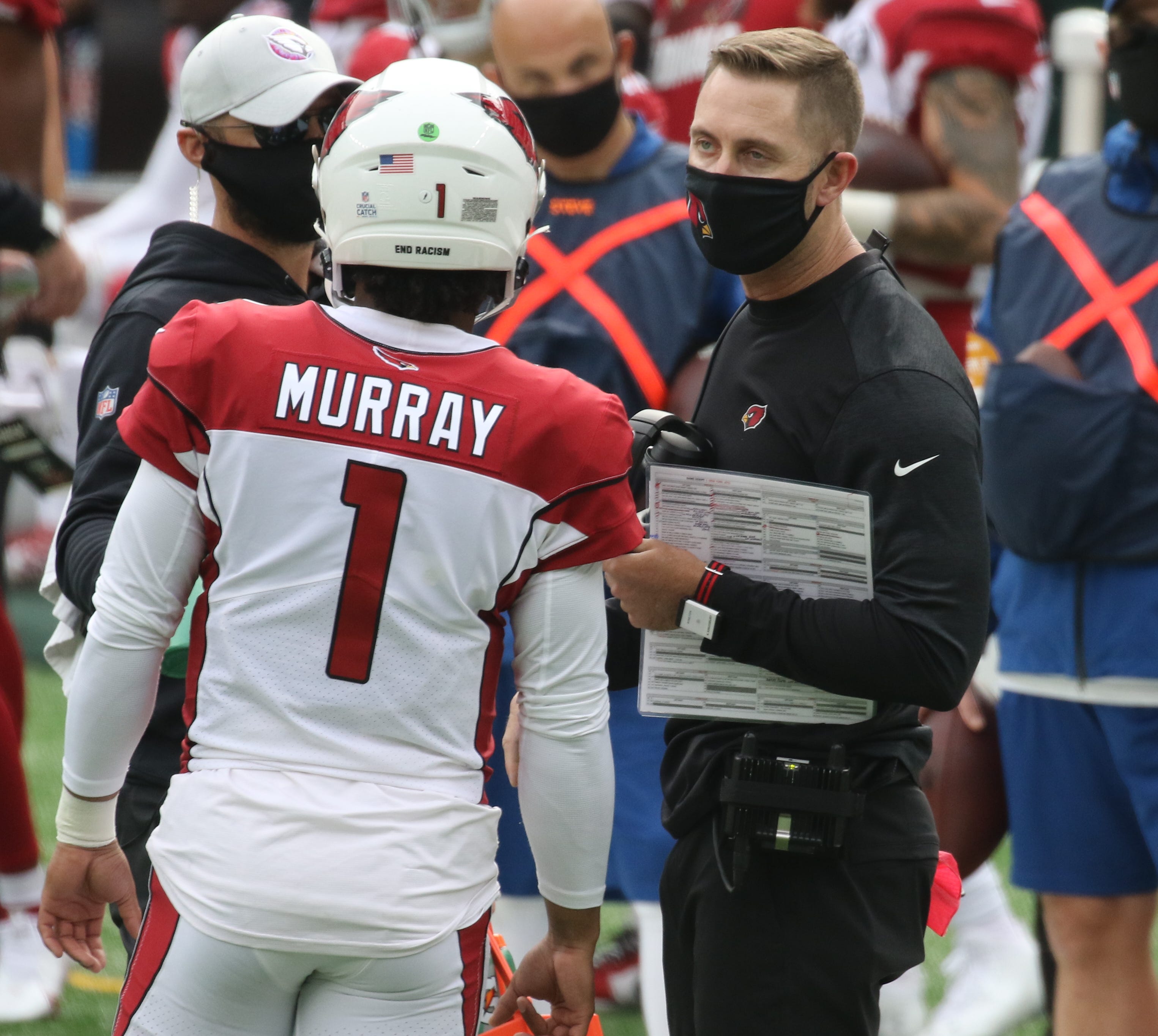 One year after trading up to draft UCLA’s Josh Rosen, the Arizona Cardinals were in a position to rectify their mistake. They did so by selecting Kyler Murray, a poster child for quarterback evolution in the NFL.

While signal-callers like Burrow and Lawrence offer a more traditional skillset at the position, the 5-foot-10 Murray had big wheels to complement a big arm. The former Oklahoma Sooner won the Heisman in 2018 before going first overall to the Cardinals, forgoing a professional baseball career with MLB’s Oakland Athletics.

Unlike Rosen, Murray showed flashes of brilliance in his debut season, earning AP Offensive Rookie of the Year honors. After three years, the 24-year-old has 70 career passing touchdowns and 20 rushing touchdowns, along with two Pro Bowl appearances. He even guided Arizona to its first playoff game since 2015, falling to the eventual champion Los Angeles Rams in January.

There has been some speculation about whether Murray is willing to sign a long-term extension with the Cardinals. Though for now, the speedster has done more than enough to earn his first-overall billing.

After an 0-16 season, the Cleveland Browns went on the clock for their most important draft pick since re-entering the NFL in 1999. With numerous quarterbacks to choose from, the Browns landed on Baker Mayfield, hoping he’d mercifully end the franchise’s QB carousel.

At a generous 6-foot-1, Mayfield wasn’t the most-gifted athlete behind center. But the fiery Texas Tech transfer became a star at Oklahoma, completing his three-year Sooners career with numerous awards, including the Heisman. Baker’s 2017 season was enough to convince Cleveland, which passed on other QB prospects like Josh Allen and Sam Darnold.

To Mayfield’s credit, the 27-year-old offered stability that was rarely seen in the last 20+ seasons. The former top pick flung 49 TDs in his first two seasons with 35 interceptions, winning 12 of his first 29 starts. In his third year, he tossed 26 scores while trimming his INTs to eight, leading Cleveland to an 11-5 record and a narrow loss in the AFC Divisional Round.

But a rocky 2021, significantly impacted by a nagging shoulder injury, zapped Cleveland’s belief in its 2018 first-rounder. This spring, the Browns traded six draft picks for Deshaun Watson, effectively ending Mayfield’s grasp on QB1. That said, there is still a chance for him to become a starter on another team before the fall.

Before landing on a franchise QB, the one-win Browns did the next-best thing in 2017. With its first No. 1 selection since Courtney Brown in 2000, Cleveland turned to Myles Garrett, college football’s best pass-rushing prospect since Jadaveon Clowney three years prior.

From the moment he stepped onto the Texas A&M campus, Garrett displayed all the makings of an elite edge-rusher. At 6-foot-4 and 272 lbs., the Texas native used his quick burst off the line to register 31 sacks in three collegiate seasons. Leading up to the 2017 draft, Garrett had secured the Bill Willis Trophy (top defensive lineman in NCAA) and a consensus All-American designation.

While injuries limited his effectiveness in two of his first three seasons in Ohio, Garrett has been as good as advertised. The 26-year-old has three Pro Bowl selections and All-Pro nods each through five years. He was named First-Team All-Pro in 2020 and ‘21, the latter of which saw him rack up a career-best 16.0 sacks and 33 QB hits.

Although his tenure hasn’t been perfect (see Mason Rudolph helmet incident), Garrett is one of the NFL’s top pass-rushers and a mainstay on the Browns’ revamped defense.

Playing in a new city with dreams of building a contender, the Los Angeles Rams made a giant swing in 2016. Originally saddled with the 15th pick in the draft, LA pulled off a nine-pick swap with the Tennessee Titans to move up to the top spot. There, the ambitious Rams selected Jared Goff as their future QB.

Unlike some other quarterbacks on this list, Goff made his mark away from the media spotlight. The Cal Golden Bear became a legitimate NFL prospect during his sophomore season before leading the Pac-12 in passing yards and touchdowns in ‘15. The following spring, he moved a few hours south to sunny SoCal.

Thanks in large part to head coach Sean McVay’s offensive gameplan, Goff rebounded from a shaky rookie year to earn Pro Bowl honors in both 2017 and 2018. In ‘18, the 6-foot-4 gunslinger threw a career-high 32 touchdowns while leading LA to a 13-3 record and a Super Bowl appearance. However, he saw severe declines in each of the next two seasons.

Last offseason, the Rams sent Goff to the Detroit Lions in exchange for Matthew Stafford, the first pick of the 2009 NFL Draft. Stafford would lead LA to a Super Bowl victory, while the 27-year-old tossed 19 TDs in 14 lackluster starts in Motown. With Detroit potentially drafting a new QB this spring, Goff’s time as an unquestioned starter looks all but over.

In 2015, the Tampa Bay Buccaneers faced a franchise-altering decision: Do they select Jameis Winston or Marcus Mariota with the top-overall pick? In the end, the Bucs took Winston, a QB who would become equal parts impressive and frustrating throughout his rocky seven-year career.

As a rookie, Winston eclipsed 4,000 yards and earned a Pro Bowl spot. Though while the yards and touchdowns came easy, so did the giveaways. The best example of Jameis’ “Jekyll and Hyde” act came in a 2019 campaign that saw a league-leading 5,109 passing yards and 33 touchdowns neutralized by a whopping 30 interceptions and another nine lost fumbles.