There always seems to be a story surrounding Cleveland Browns quarterbacks.

Whether it’s the jersey, everyone wanting the backup to get a chance to play, or more recent developments, we always have an eye on the key position for our beloved Browns.

Jacoby Brissett made note of a fact concerning the quarterback room for the 2022 season. I will preface this with the obvious. We know that Baker Mayfield is still a member of this football team. That is not the expectation when the season begins, and he is not taking part in the team’s voluntary workouts.

Now people can point out that Brissett is making something about race that doesn’t need to be about race. I would submit that playing QB in the NFL was about race for decades, and he was merely calling attention to the fact that this is no longer the case.

The Browns are not the first team to have such a room, but it is special when it happens in Cleveland due to the Browns commitment to diversity. The Browns have led the way in the NFL and likely in all of sports in hiring people from different backgrounds regardless of their race, sex, sexual orientation, or any other reason. The Browns appear to want different types of people in their organization to get different viewpoints. There is also an ability to look at people for the value they bring rather than the limitations they may supposedly possess.

When I was a kid, I started collecting baseball and football cards. It was the late 1970’s and it was a way for me to learn about the players. We lived in an all-white suburb in Columbus and then proceeded to move to another all-white suburb in Cleveland. I had very little interaction with people of different races. In fact, the closest I got was probably playing with the Italian kids across the street.

I did watch sports though. It’s funny because I think back, and I never saw the race of players. Well, I mean it was never something that had an influence on me. I saw players. That was it. My favorite baseball player early on was Lou Brock because I knew he stole bases. I was just learning about football.

The first real football cards I collected were the 1979 Topps set. I was lucky enough to get three Walter Payton cards out of packs. I still have them all. I knew who he was even then. I also recognized the oddity of a player named James Harris who was a quarterback for the San Diego Chargers. Harris was the only black QB in the league at the time. I knew something stunk about that even as a kid. It may have been the first time I was ever made aware of the different set of rules that different people faced. It never sat well with me. 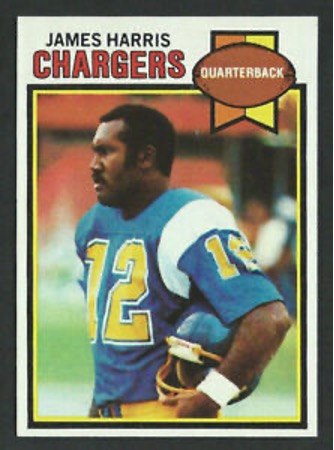 The image of Harris holding his helmet as a backup in the NFL has stuck with me to this day. I never studied his career, but for me, he was the example of a great iniquity in the world. One that everyone had to see over 40 years ago.

Fortunately, things have changed. Guys like Randall Cunningham, Doug Williams, and many others paved the way for today’s acceptance of quarterbacks who are not white. Forgive me if I raise a little toast to Jacoby Brisset for seeing and maybe even celebrating something that should never have been an issue.

All we want is life is to be judged by the content of our character. All I want to see in sports (and life, too) is a level playing field where race, gender, and sexual orientation are afterthoughts; where people are given opportunities due to the skills they possess and the abilities they have shown. Progress is good to see, but there is much work to do.